Built on McKay Street in Pembroke in 1892, this building housed the Pembroke General Hospital until 1954. It was here, in 1919 that Sister Saint Elizabeth opened the first school of Nursing and in 1920, the first “Nurses home” named the Lorrain Memorial Wing was opened in this building.

In 1954, the old hospital was replaced by the new Pembroke General Hospital built on the property to its south.

That same year, the nurses’ living quarters were expanded to a full wing in the old building after the hospital’s move next door.

In 1959, additional accommodations were secured in a house on Market Street shown below. Following the hospital’s move, the main part of the building was transformed into the Marianhill Home for the Aged and served that purpose until 1980 - 81.

The obsolete building was demolished following the move of Marianhill to its current location behind the hospital on Cecelia Street.

Blocks of limestone from the building were sold to local residents who still have parts of Pembroke’s early health history on their properties. Currently there is no reminder of the first General hospital and the land is converted parkland and the home to a heliport which provides emergency aviation transport services to the hospital.

NEEDED – A NEW NURSES RESIDENCE
In 1959, recognizing the need for more and updated accommodation for the nursing students, a new residence was commissioned from the architectural firm – Drever and Smith Architects of Kingston, ON.

The building’s construction was awarded to M.Sullivan and Son of Arnprior, ON and the official sod turning took place on October 31, 1960.

It is memorialized in the photo below On October 31, 1960, His Excellency, Most Reverend W.J. Smith turned the sod to mark the beginning of construction of the New Nurses’ Residence.

Other well known supporters throughout the years are Monsignor C.J. Jones, Monsignor S.P. Owens, Monsignor H.O. Grenier and Monsignor E.T. McNally. Mayor Angus Campbell was represented by A.W. Redmond. Mother St.Helena, Superior General of the Grey Sisters of the Immaculate Conception, Chair of the governing Board; H. Graham Walsh, president of the hospital advisory board; H.P. Smith of Drever and Smith Architects, Kingston, architect; and Dominic Sullivan of M. Sullivan & Son Ltd. , Arnprior, general contractor for the project; Dr. C.B. Munro, Chief of staff, and Dr. J.O. Foohey, president of the medical staff, members of the School of Nursing Advisory Committee, members of the nurses’ alumnae, the faculty and student body of the Lorrain School of Nursing, and members of the General Hospital staff were among those present. Following the ceremony, the guests were served a buffet lunch at the hospital.

The new residence was opened officially in 1961 on November 19th by Rev. W.J. Smith, Bishop of Pembroke. The address was given by Miss Edith R. Dick, Reg. N. and presiding was H. Graham Walsh, Chairman of the Hospital Lay Advisory Board. Also in attendance was Sister Elizabeth, foundress of the Lorrain School of Nursing. The new building was a step forward in the progress of the school and through the years did much in providing a warm and pleasant atmosphere for the students

Since the move of the Nursing programme to Algonquin College in 1974, the Residence has been converted to a facility which supports other health-related uses. Currently (2012) home to a number of doctors’ offices, outpatient clinics and administration-related offices, it continues to provide needed facilities for the Pembroke General (Regional) hospital. The auditorium has been converted to a Day care Dialysis Unit. The former library area contains a pharmacy and the second floor recreation room serves as a meeting room for a variety of functions.  It is still connected to the hospital by the underground tunnel as well as above ground passages. 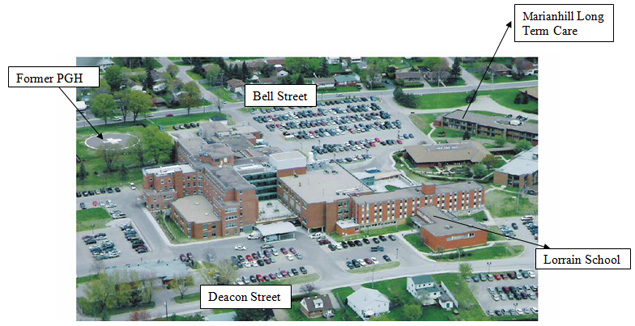 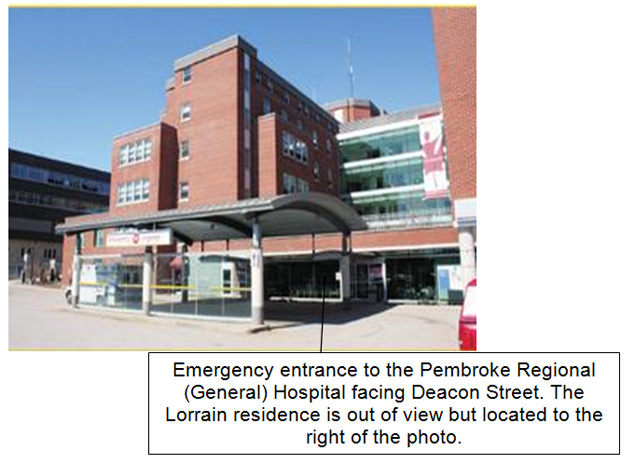