History of the Nursing Cap

History of the Nurse’s Cap in Canada
The evolution in the design of nurses' caps, from nun's coif, to no cap, reflects the history of nursing in Canada. The first nurses to come to Canada from Europe were The Hospitalières, a Roman Catholic nursing order, who arrived in Quebec in 1639 to establish a medical mission that expanded to become the Hôtel-Dieu Hospital. They introduced the first formal apprenticeship training in nursing in North America. Nursing nuns had no special headdress for nursing, but wore the coifs that were part of their habit.

A Coif
The British colonies did not have the organized approach to health care that New France had. Nursing was done informally by female family members, with the occasional consultation by a physician. The few hospitals employed charwomen who provided patients with rudimentary health care. While they often brought useful experience to their work, they were often viewed as slovenly, lazy and drunken. Whether these women worked in patients' homes, or in hospitals, they wore their everyday clothes. Most working women at that time wore a white cap, but there was no special "nursing" cap.

A revolution in medical practice by the mid-nineteenth century had a profound effect on nursing. At the same time, Florence Nightingale developed a system to train "respectable" women in nursing, which served as a model in English Canada. The first nurse training programme based on the hospital apprenticeship model was established in 1874 in St. Catharines, Ontario. Nurses who graduated from these training programmes were, for the first time, required to wear uniforms to distinguish them from their untrained competitors.

EXAMPLES OF SOME NURSES CAPS

Until the 1970s, nurses were instantly recognized by their caps. Each school and hospital had its own cap design and means of indicating the level of training.

Like all garments that had to be frequently bleached clean, nurses' caps were invariably white. Most caps were cut from a flat pattern, so they could be unfolded for cleaning, pressing and starching. Very early caps were sometimes made of linen gauze but most were made of cotton, starched to a high sheen and cardboard rigidity. Certain laundries often specialized in this starching technique.

EXAMPLES OF SOME NURSES CAPS

As hospitals expanded in the early-twentieth century, many had to find shortcuts in the maintenance of nurses' uniforms. Cap design was simplified. New man-made fabrics were incorporated into caps, along with textured paper and vinyl, which could be thrown out and replaced when worn or soiled. The classic nurse's hospital cap with turned back winged brim that most people recognize is a much modified form of the nun's coif.

During the 1870s, the nurse's cap was almost identical to that worn by working women indoors, consisting of a gathered oval caul covering the back of the head and the hair, and a close-fitting headband. Another model was the mob cap, an oval or circular piece of cloth gathered onto a band.

Some nurses' caps resembled, in modified form, the nun's coif, to signify the respected tradition of Roman Catholic nursing and service to humanity. The coif was certainly the choice for military nurses who served in both world wars in the twentieth century. 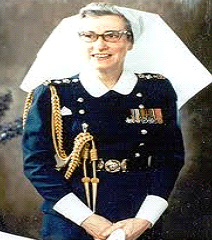 In France, nursing orders often served in military as well as civilian hospitals, a custom that gave rise, in later years, to the practice of calling all nurses who served in the military, "nursing sisters".

Many Canadian nursing sisters wore a large white starched cloth, folded over their heads like a nun's coif. Very soon, however, these antecedents became highly stylized. Instead of caps designed for function - covering and keeping the hair neat - they began to take on a symbolic form. They were a very visible and symbolic part of their uniform, reduced in size, and heavily starched into form, so as to perch precariously on the back of their head.

Of course, what nurses wore on their heads depended on where they were and under what circumstances they provided care in as these first nursing sisters of the Royal Canadian Army Medical Corps demonstrated after they landed in France after D-Day. France, July 17, 1944 or as they are shown below at the No. 3 (Basic) Training Centre, Kitchener, Ontario, April 6, 1944. 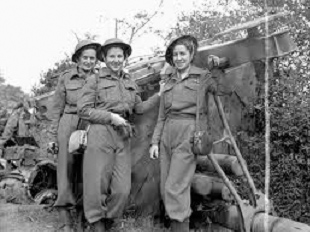 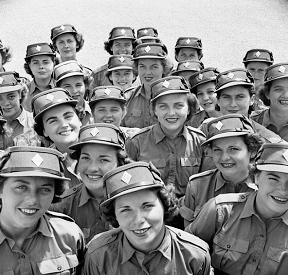 Many, but not all, nurses' caps had coloured bands which indicated level of training.  The black band invariably indicated the graduate nurse, while other colours were used to indicate the first and second year of training. Some say that the black band was introduced as a memorial to Florence Nightingale. The use of bands may also have had its origin in the bands or stripes on military uniforms, and certainly the graduate black had a military look. But interestingly, undergraduate colours such as pink, turquoise or yellow were more traditionally feminine. Today (2012) this symbol of knowledge and caring has all but disappeared.

THE DEMISE OF THE CAP
There are several reasons why nurses' caps, along with the rest of the uniform, began to disappear in the 1970s. As nursing became more professionalized, there was a movement by some nurses who wanted to identify more with doctors and other professionals who wore no uniform.

At the same time, hospitals started employing ward aides and nursing assistants who were also outfitted with caps and subsequently the authority of the graduate nurse's cap was eroded.

In the 1960s to 1980s, hospital schools of nursing gave way to community college and university schools. The apprenticeship system of teaching, with its ritualized progress through the ranks, no longer dominated nursing education and thus the cap lost much of its symbolic meaning as a signifier of achievement at various levels.

There was some thought as well that the cleanliness of caps could be problematic and the caps became a physical nuisance while providing care in close spaces.

Male nurses have never worn caps. In recent years nursing leaders have tried to encourage more men to enter nursing, and sex-specific uniforms conflicted with the larger goal of attracting men to the profession
Nurses' caps can still be found worn in many developing nations, as well as in some countries where women still make up the overwhelming majority of nurses.