Capping was especially significant for Lorrain School of Nursing students, as the privilege of wearing the “Cap” had to be earned. For the first 6 months of their training programme, students did not wear a cap. Upon successful completion of the 6-month probationary period, first year nursing students received their first caps with their first stripe.

The capping ceremony was a big event with an official ceremony in the hospital chapel or at the Grey Sisters Motherhouse and a reception for family and friends. The ceremony promoted school loyalty and pride and inspired students to persevere through the rigours of training ahead. Part of the ritual was a vow to behave ethically and honour her profession.

Capping exercises were held in the Grey Nun’s Motherhouse Auditorium on McKay Street on December 22, 1961.

LSN nursing students had black stripes placed on the right hand corner of their cap to indicate their level of training. Year one students, following capping, were awarded one stripe for their caps; at the beginning of year 2 the second stripe was added and a third one at the start of the third year. 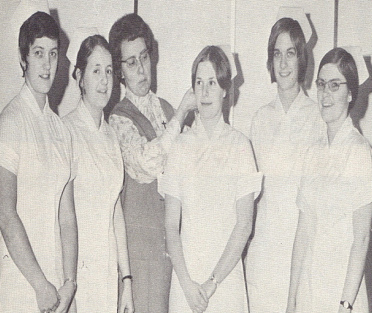 LEFT: Sister Rita Kehoe adjusts the cap of a first year student who has just received her nurses’ cap.  RIGHT: Half way through the third year, successful students were awarded the black band.

Wearing the cap was a privilege, and a nurse in training could have her cap revoked if she broke school rules.