Nursing class together again after 50 years

The Lorrain School of Nursing Class of 1959 will live on, if not forever, then for a good long time.

As a surprise for the women attending the 50th anniversary of their graduation held over the weekend, one of the graduates came up with the idea of naming a star after the class as a sort of gift to everyone.

"It's our 50th reunion and naming a star after the class is something that will live beyond," said Mary Cameron. "I thought this was a good idea rather than buying something. I mean we used to give ashtrays back when we all smoked but this is something that you don't have to dust and that doesn't have to be cared for."

Friday, Saturday and Sunday, eight women from the school's graduating class of 1959 returned to Pembroke for a reunion to mark the occasion.

Smiles and hugs were the order of the day on Saturday as the group shared memories and told stories following a tour of the recently rennovated Pembroke Reigonal Hsopital.

Three members of the class were unable to attend. One member has died while the two more were not well enough to travel.

The eight that were able to attend came from throughout Ontario including Pembroke, Renfrew, and Ottawa, and from as far away as Orillia and Hamilton.

Ms. Cameron said the graduates have gathered together on and off over the years but the occassion of their 50th anniversary was special and the first one that included a visit to the hospital.

"The hospital has been very good to us. They held a 50th anniversary tea for us and the tour was really very nice," Ms. Cameron said. "None of us had really been back to see all the changes."

With Ms. Cameron, Marcia Timm helped coordinate the reunion with the hospital.

She said when the group gets together, there are a lot of old-time memories that come back and stories shared about their time at the school. 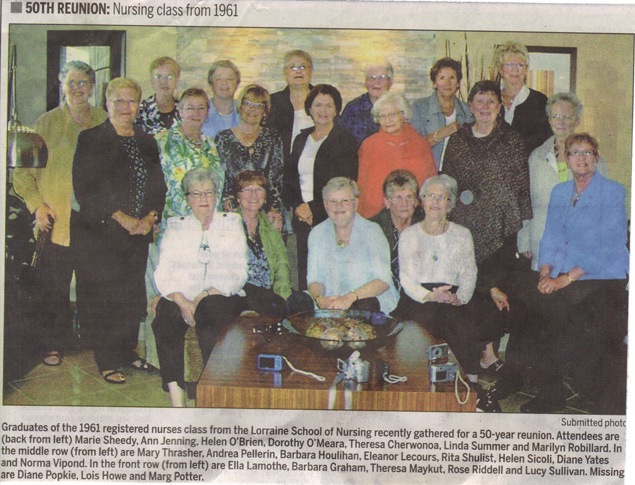 Also on hand for the reunion was Sister Mary Rena Spooner, the director of student nursing at the school back in 1959 and also three of the group's nursing instructors, Claire Cotnam, Isabelle Hickson and Catherine McMaster.

Some of the group got together Friday to reminisce with the first scheduled event being a group breakfast Saturday morning.

The group then toured the hospital and enjoyed a reception in the cafeteria.

Then they moved to the facility's chapel to remember family and friends that had supported them over the years and remember their departed classmate.

A dinner followed in the evening.

"It has been a really fun and an emotional time for me," said Ms. Cameron.

Ms. Timm said she was having a great time as well.
"It has been wonderful to see everybody that graduated together in 1959," she said.